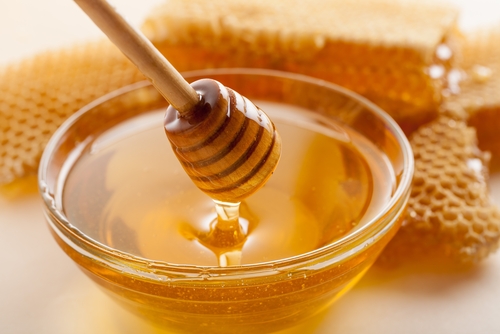 7 Reasons Why You Need Honey in Your Diet

The animal kingdom caught on way before us humans to the deliciousness of honey. Animals like bears and badgers have been raiding bee hives (and getting stung in the process) for a taste of the sweet, sticky, golden substance for a very long time.

You can hardly blame the bees for wanting to protect their food supply, as it wasn’t all that easy for them to make. It actually takes roughly 60,000 bees, all traveling nearly 55,000 miles and mingling with about 2 million flowers, to gather enough nectar to make one single pound of honey. That’s a lot of work!

But the work doesn’t stop there. Once all of that nectar is gathered, the bees store it in their extra stomach (yes, they have an extra one) where it mixes with enzymes before they regurgitate it to another bee’s mouth. This bee mixes it with more enzymes and passes it on to another bee, and the whole process continues until the nectar becomes partially digested.

At this point that nectar is deposited into a honeycomb, and the bees continually fan it with their wings, which helps any water to evaporate, and the result is a thick substance we call honey. The bees then seal the honey with a liquid they secrete from their abdomen and it hardens into beeswax. The honey can then feed the bees through the cold winter months.

Once you know how much work goes into making honey, you understand why local, raw honey can cost a pretty penny!

We have valued honey as a natural sweetener before sugar came on the scene in the 16th century. In fact, honey production was big business during that time in Greece and Sicily. While honey is also high in fructose, unlike regular table sugar, it has many health benefits.

Honey’s blend of sugar, minerals, trace enzymes, vitamins, and amino acids makes it unlike any other natural sweetener on the planet loaded with numerous health benefits:

Honey is a terrific source of all-natural energy. It’s natural unprocessed sugars (fructose and glucose) quickly enter the bloodstream delivering an almost-immediate boost of energy. This short term energy can be particularly beneficial right before heading to the gym for your daily workout.

Did you know that the body naturally converts serotonin – the neurotransmitter that improves mood – into melatonin, the chemical compound that regulates sleep? Honey not only causes a natural rise in insulin but also serotonin.

Honey also contains the amino acid tryptophan (you most likely associate tryptophan with turkey and sleepiness). Tryptophan is converted into serotonin, which, as I’ve just mentioned, is then converted into melatonin. So you could say honey packs a double punch when it comes to feeling nice and sleepy before bedtime.

[Editor’s note: Honey is a great way to calm your nerves before bedtime – but if you’re like me, it’ll take more than a spoonful of honey to bring about relaxation… Which is why I recommend this medically proven relaxation therapy. Enjoy!]

Though more studies need to be conducted regarding honey’s ability to fight seasonal allergies, some in the medical community believe honey’s anti-inflammatory properties indicate it can be effective at alleviating allergy symptoms. The theory is that local honey acts as a natural vaccine. Since it contains small amounts of pollen, the body is regularly exposed to these allergens, which trigger an immune response that produces antibodies. After repeated exposure, the body builds up enough antibodies and less histamine is released resulting in less allergy symptoms.

Honey is rich in antioxidants that help prevent cellular damage throughout the body. In a 2011 study  published in Menopause, researchers found that just a daily spoonful of Malaysian honey may have the ability to boost postmenopausal women’s memory. This makes honey a great alternative therapy for hormone-related cognitive decline. After following the women for four months, those taking just 20 grams of honey a day had better short-term memory than those who took hormone pills.

Your mother or grandmother may have given you honey when you had a cold to keep those awful coughing fits at bay. Well, it turns out honey really is a natural cough remedy. A 2012 study published in the journal Pediatrics found that children between the ages of 1 and 5 with colds coughed less frequently when given two teaspoons of honey one half hour before bed.

Honey’s thick consistency coats the throat and, because it tastes great, kinds don’t mind swallowing down a couple of teaspoons.

You don’t always have to eat honey to get benefits, sometimes you can slather it on various parts of your body. A 2001 study published in the European Journal of Medical Research found that applying honey that has been diluted with 10% warm water directly to the scalp, and leaving it on for three hours before rinsing, relieved itching and scaling within one week. Skin lesions also healed within two weeks, and patients even experienced an improvement in hair loss.

As I just mentioned, honey is a natural antibiotic that works internally and externally, making it an effective treatment against wounds and burns with the ability to disinfect against bacteria like methicillin resistant Staphylococcus aureus (MRSA). A 2005 study published in the British Journal of Surgery found all but one of patients who suffered from wounds and leg ulcers showed remarkable improvement after applying a topical application of honey.

3 Easy Ways to Include More Honey in Your Diet

Instead of starting your day with a cup of coffee, start it with a cup of warm honey lemon water, which is far more hydrating and healthy for you. Simply warm (don’t boil) a cup of pure water, add the juice of half a lemon and a teaspoon of raw honey and sip. The honey will give you a burst of energy and the pectin from the lemon will naturally suppress your appetite so you don’t eat that huge muffin followed by the scone you know you shouldn’t have.

If you’re a tea drinker, stop putting sugar in your tea, a sweetener with zero health benefits, and replace it with honey. You can also bake with honey and smear it on toast instead of sugary jams.

Use it in Dressings and Marinades

So many salad dressings and marinades call for sugar, but you can easily use honey instead. In fact, you may have already noticed that a lot of Asian recipes include honey as a base for their sauces and marinades.

After learning all about the benefits of honey, you’ll never look at a bee the same way again!