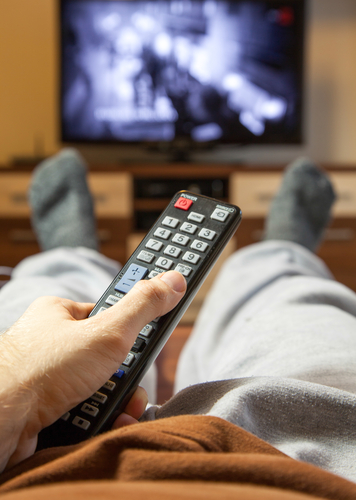 Study Finds Watching Too Much of the Boob Tube Causes Diabetes

Americans have always spent too much time watching television. But now, with our ability to stream our favorite programs and binge watch an entire season of Bates Motel in one weekend, we are spending more time than ever before in front of the boob tube. And new research has revealed this has put many of us at risk for developing type-2 diabetes.

The study, published in the journal Diabetologia, followed a group of people who were already at a higher risk for developing diabetes and found that for every hour spent sitting watching television the risk of developing type-2 diabetes rose by 3.4%. This percentage rose significantly, up to 30%, when people spent an entire day binge-watching. Andrea Kriska, an epidemiologist at the University of Pittsburgh and senior author of the paper believes these increases will only continue.

“With streaming TV, you can watch a program continuously; instead of watching just half an hour once day a week, you can watch a whole season in a day, so we expect to see increases in sitting to continue.”

Kriska is part of the Diabetes Prevention Program Research Group, which found that individuals who spent more time sitting, whether they were watching TV, working on the computer or driving, were more likely to develop diabetes than those who sat less, regardless of how much they exercised.

The Study at a Glance

Researchers studied a selection of enrollees from the Diabetes Prevention Program. These individuals were at higher risk of developing diabetes. Part of the group was asked to exercise at a moderate level each week for at least 150 minutes total. They were also told to change their diet with the goal of losing 7% of their body weight by the end of the study. Other members of the group were given the diabetes drug Metformin, and still others were given a placebo. After three years the results showed that those who changed their lifestyle by exercising and improving their diet decreased their risk of developing diabetes by 58%, while those that took the drug only decreased by 31%.

But the researchers, who had assumed lifestyle played a significant role in developing the disease, wanted to see what role, if any, sitting played in reducing risk. They wanted to find out if sitting more helped people be less active in general and if time spent sitting had any connection to the rate of diabetes.

Bonny Rockette-Wagner, from the department of epidemiology at Pittsburgh, revealed their findings, “There is an independent effect of sitting behavior on diabetes incidence that does not have to do with physical activity. It’s an independent, additional effect.”

Turns Out Sitting is a Really Bad Idea

Are you sitting down? If so, you’ll want to stand for this, and for a lot of other things too as it turns out. We are a sitting society though we are a movement-oriented species. Our ancestors moved. They moved a lot. Then suddenly, through innovation, we became a society obsessed with comfort and we began to sit as often and as long as we could. And now all of this comfort is coming back to haunt us.

New research is pointing to evidence that a standing body uses energy completely differently from a sitting body. Everything works differently in our bodies when we stand, even our brain. While more data is being collected, there was a recent experiment in a high school where the students improved their test scores by 20% simply by standing.

Other research has shown that people who spent more hours of the day sitting were far more likely to develop a host of health problems. For instance, a recent review of 43 studies analyzing daily activity and cancer rates found that those people who sat longer had a 24% greater risk of developing colon cancer, a 32% higher risk of endometrial cancer and a 21% higher risk of lung cancer, and this was regardless of how much they exercised.

The results of the diabetes study strongly suggest that those who are at higher risk for developing the disease should set a goal of sitting less each day. Krista and Rockette-Wagner recommend starting by spending just a few minutes less on the couch each day and increase the time little by little. And, while the researchers admit that sitting less doesn’t give you a get-out-of-exercise-free card, exercise is always going to be important, it is equally important in the fight against diabetes that you stand throughout the day.

What if some day there was a 100% natural protocol that could completely reverse diabetes? Though standing would certainly be beneficial on joints and muscle tone, wouldn’t it be great if you didn’t have to worry about your blood sugars anymore?

One medical expert says this is not only possible, but that patients can reverse their diabetes without needing to take any potentially harmful medications.

In the free video on the very next page, she shares the details of this diabetes-reversing method and how you can learn a few simple tweaks to what you eat and how you move that can engineer a metabolic reboot so you can maintain healthy blood sugar levels for the rest of your life.

She even shares one specific step you can try immediately to help you get control of your diabetes today.

If you’d like to learn the strategies and tools to fix your blood sugar system without relying on drugs watch the video now.