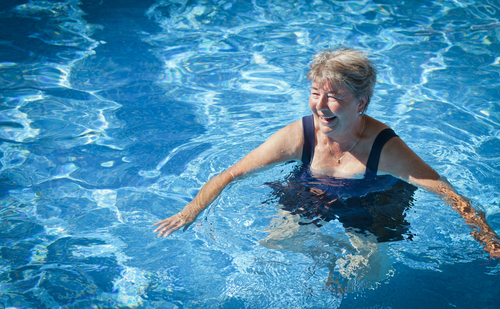 When it comes to the health of your brain, it’s never too late to start exercising. If you are over the age of 55 with an attitude of, “why bother starting to exercise now,” here are four amazing reasons why:

One of the biggest things exercise does for your brain is release a host of chemicals that have been proven to help fight anxiety and depression. A review of literature published in “Frontiers in Psychiatry” has this to say: “the evidence suggests that exercise can improve depressive symptoms and this is observed even in those suffering from major depressive disorder.”

One commonality in seniors is the onset of depression. Don’t let it ruin your Golden Years – what are supposed to be the best of your life. Spend a few days a week walking around your neighborhood or getting on that exercise bike that’s been sitting in the basement for the last six years collecting cobwebs.

One of the biggest reasons for cognitive decline in seniors is the simple fact that their brain isn’t getting the nourishment it needs to function properly. But studies have shown again and again that exercise increases the blood flow to the brain, even in older people who have been sedentary for many years. Increased blood flow means more oxygen and nutrients reach your brain and feed it so your cells have more fuel to operate properly.

By the time we reach a certain age many cells in our body have been damaged from lifestyle choices and environmental conditions. One extremely important thing exercise does is it turns on the expression of neuroprotective genes which in turn cause the secretion of proteins which protect brain cells from damage from pesticides we consume and other harmful factors.

Research has uncovered a pretty amazing fact about exercise – not only does it help produce new neurons in the hippocampus, it also helps us produce glial cells which support the function of neurons. Tests done on seniors have found that the glial cell production is affected most strongly with exercise.

How Can Seniors Gain the Most Benefit from Exercise?

For decades we have been told that aerobic exercise like jogging, swimming or biking that get the heart rate up is the best form of exercise to take care of our hearts at every stage of life, but does the same apply to the health of our brain? What science is now discovering is that any form of exercise, not just aerobics, increases blood flow to the brain and aids in the production of cells and neurons.

So really, we simply need to move more as we age and not worry about very strenuous exercising to receive maximum benefits. Even movement as simple as walking down a hall or putting the dishes away can be neuroprotective. What a great way to get your spouse to do more around the house – just tell them you’re looking out for their brain!

The bottom line is, even the smallest increases in movement can have tremendous protective benefits for seniors and their brains. So even those who experience stiffness of joints no longer have an excuse not to move more. Plus movement will generally help with the stiffness as well.

Here are some easy ways seniors can get more movement into their life:

Studies are finding that exercise can do a lot more for senior brain health; it can improve and even prevent dementia symptoms and increase memory and alertness. A study by the Center for BrainHealth at the University of Texas at Dallas found that “engaging in a physical exercise regimen helps healthy aging adults improve their memory, brain health and physical fitness.” The researchers attribute this to the increased blood flow brought on by exercise.

The highest risk factor for getting dementia in later years is poor blood flow to the brain, so it makes sense that exercise, which gets the heart and blood pumping, would have a tremendous positive effect on the debilitating disease.

The Center for BrainHealth study also showed that exercise promoted blood flow to a specific and very important part of the brain – the anterior cingulate –which is a part of the brain linked to cognition, and to the hippocampus, which scientists now say is the key brain structure involved in Alzheimer’s disease.

If you’re a senior or caregiver of a senior the takeaway here is: it is never too late to start exercising and reaping the amazing benefits.