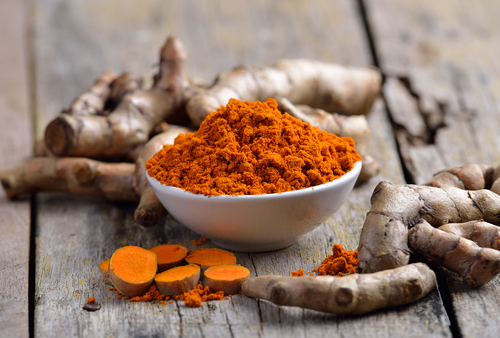 Hippocrates, the father of medicine, once said, “Let food be thy medicine and medicine be thy food.” He knew way back then that what we eat greatly contributes to our health, or lack of health.

There are so many wonderful foods, spices and herbs, many of which we’ve covered on this blog before. But today we want to talk to you about a very special and beneficial spice and that is turmeric.

The Most Nutritional Supplement Ever?

That’s what many health experts say. All of this praise stems from the numerous high-quality studies that show the many health benefits of this delicious spice.

But what exactly is turmeric? Because people are easily confused when we talk about turmeric and curcumin in the same sentence, we’ll break it down for you now.

Turmeric is the name of a spice that gives curry its yellow color. It has been used in India and other parts of the world for thousands of years as both a spice and medicinal herb.

Science is now learning what Indians have known for so long, turmeric contains compounds that offer medicinal properties. These compounds are called curcuminoids, the most powerful one being curcumin.

So technically curcumin and turmeric are not the same thing, but curcumin is a powerful compounds within turmeric.

So when we say the health benefits of turmeric, we are really saying that when you eat turmeric you are getting powerful curcumin into your body.

Let’s now dig a little deeper into the wonderful health benefits of turmeric:

Inflammation has its good points and its bad points. Your body needs it every once in a while to fight infections and illness, like when you cut yourself or get a bee sting. This is the good kind of inflammation.

While the acute, short-term inflammation is beneficial, the bad kind is inflammation that goes on and on for days without end, resulting in diseases like heart disease, arthritis, diabetes, Alzheimer’s and cancer, well that’s the kind we want to avoid like the plague, which was also most likely caused by inflammation!

It stands to reason that any nutritional supplement that can decrease chronic inflammation would then help prevent or even reverse some major diseases. This is where it gets really exciting… curcumin has been found to be as strong of an anti-inflammatory as many standard anti-inflammatory drugs. Even better, it doesn’t come with all of the dangerous side effects of those drugs.

Without getting too science-y, curcumin blocks a molecule called the NF-Kb molecule that goes into the nuclei of your cells and turns ON the genes related to inflammation. So, long story short and what you need to remember is that curcumin fights inflammation on a cellular level.

Beyond inflammation, oxidative damage is believed to be one of the biggest culprits behind aging and the development of many diseases. Oxidative damage is caused by unstable free radicals in the body that are looking for an extra electron to steal from healthy cells around them. They tend to steal these healthy cells from important organic structures within the body such as fatty acids, proteins and DNA.

Antioxidants are so important because they protect your healthy cells from the rogue radicals. Curcumin is one of the most powerful antioxidants that can neutralize free radicals. In addition to this, curcumin has the ability to boost the activity of your body’s own antioxidant enzymes. That’s a powerful win/win.

Your brain has something called “Brain-Derived Neurotrophic Factor (BDNF).” BDNF is essentially a growth hormone for your brain. Many diseases including depression and Alzheimer’s are linked to a reduction in BDNF levels.

Did you know that heart disease is the leading cause of death globally? The good news is, curcumin has been found to be very effective in decreasing the risk of heart disease. This most likely stems from curcumin’s ability to improve the function of the endothelium, which is the lining of your blood vessels.

5. Curcumin Helps Fight the Pain and Stiffness of Arthritis

As we mentioned earlier, curcumin is a powerful anti-inflammatory, and it is inflammation that causes the joint pain and stiffness of arthritis. As with some of the previous studies, a study found curcumin to be more effective than a commonly-prescribed anti-inflammatory drug.

This is great news to so many who suffer not only from arthritis, but from the nasty side effects of many NSAIDS, including stomach ulcers, dizziness, and high blood pressure.

With its ability to lower inflammation throughout the body and reduce damage from oxidative stress, turmeric is not only a delicious addition to your menu but a healthy one as well. You may also want to consider speaking with your doctor about adding a curcumin supplement to your diet.

Would you like to hear about another natural alternative to arthritis pain and stiffness?

The Joint Pain Solution was written by a doctor who cured his own arthritis pain and stiffness he had lived with for many years. He has shared this information with his patients and now he’d like to share it with you.

Pick up your copy of The Joint Pain Solution today – Click Here!