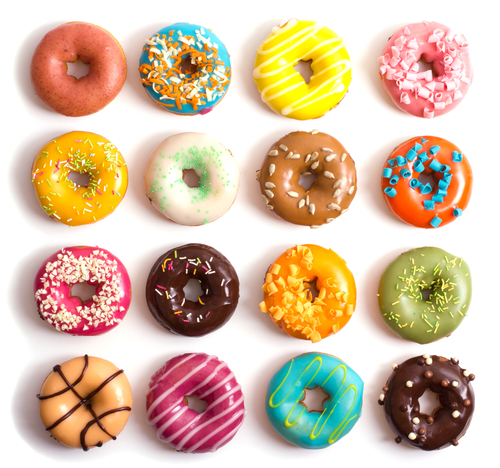 Did you know you make over 200 decisions about food each and every day, though you’re only aware of a small fraction of them? That’s because your subconscious mind makes most of the decisions for you, and when this part of our consciousness is in charge, we tend to overeat and gain weight.

Here are 5 science-backed ways to stop mindless eating so you can lose weight and avoid developing (or completely reverse) diseases like type 2 diabetes and hypertension.

Your mother probably told you at some point growing up to slow down while you were eating. She was absolutely right.

When we mindlessly rush through a meal, we don’t allow our body to release hormones that promote the feelings of fullness. Experts agree you should take 20-30 minutes to finish a meal. If you are usually done with your food in 5 minutes and reaching for that second helping, it’s time to slow way down.

Behavioural scientists have conducted some pretty neat experiments to show that people decide whether they are full or not based on external signals instead of internal ones.

In one study, participants were given unlimited amounts of chicken wings to eat while they watched a sporting event on TV. Some of the tables were cleared of the chicken bones while the other tables weren’t, letting the bones accumulate.

The people with bones on their table wound up eating 34% less than the others whose bones had been cleared away.

A separate study gave half of participants bottomless bowls of soup that were slowly refilled while the other half did not have their bowls refilled.

As expected, the participants who ate from the bottomless bowls consumed 73% more soup, which resulted in an extra 113 calories.

The moral of the story? Always keep evidence of what you have eaten in front of you so you have a visual reminder of how much you’ve eaten. This includes empty buffet plates and beer bottles.

The old saying, “Out of sight, out of mind,” is completely relevant when it comes to mindless eating. In one study, researchers gave secretaries Hershey’s Kisses in covered bowls that were either clear so they could see the candy, or solid, so they couldn’t.

As you may have guessed, the secretaries who were given the clear bowls ate 71% more often throughout the day, resulting in added calories. Scientists believe that seeing food typically increases our desire to eat it.

Do your best to hide tempting snacks out of sight so you don’t mindlessly nibble all day.

This tip is pretty common sense, yet very few people are following it. The idea is that the more effort you have to put into eating a certain food, the less likely you are to eat it.

Remember those secretaries that were given those bowls of candy? Well the scientists tried another experiment on them. This time they took the clear bowls of candy and placed them in three different spots around the office: right on the desk in front of them, in a desk drawer, and 6 feet away from their desk.

Inconvenience can be your friend when it comes to mindless eating, so make eating harder for yourself.

5. Unplug While You Eat

In our parents’ and grandparents’ day, families gathered around dinner tables to eat. These days, many families gather around the TV instead. Many adults also eat while surfing the web on their laptop or mobile phone.

But studies have shown that eating while you are distracted can lead to eating faster and eating more – AKA – mindless eating.

In one study, participants who ate while watching television ate 36% more pizza and a whopping 71% more macaroni and cheese.

Another study found that participants who played a computer game while eating lunch felt less full and snacked nearly twice as many biscuits later, compared to their non-distracted counterparts.

The bottom line is, it’s important to stop mindlessly eating. Numerous studies have shown that when we become aware of what and how much we eat, we naturally stop ourselves from overeating. This in turn can help us lose weight and keep metabolic diseases away. If you follow these tips you will be well on your way to eating consciously and not subconsciously, and you’ll begin to see weight come off.

Want to learn a delicious way to help you lose those unwanted pounds?

What if weight loss actually could be easier?

What if a doctor told you exactly how to prepare the PERFECT meal for weight loss and health? What if they told you EXACTLY what ratios your macronutrients should be in (so you turned into a fat burning machine)? And, what if instead of letting you go it alone, they sent you not only recipes each week, but an actual shopping list that was organized by ingredient type to make your trip to the grocery store quick and efficient.

And, what if you could get this kind of help for less than $10 a month?

Sound too good to be true? Think again.

Perfect Meal Plans could finally be your answer to losing the weight and keeping it off. Sign up today.