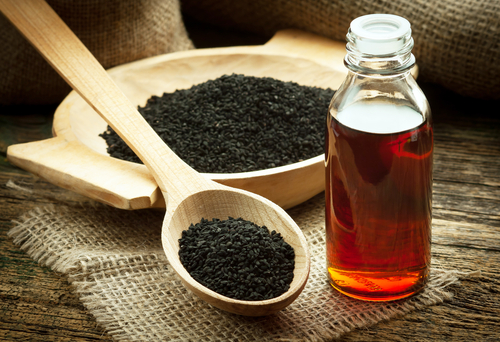 You’re no doubt familiar with sesame seeds and poppy seeds, but have you heard of black cumin seeds? Also called Nigella sativa, these seeds have been revered for their medicinal properties for thousands of years and were actually mentioned in the Bible, along with numerous other ancient texts.

Black cumin seeds have traditionally been grown and used throughout Egypt, and in fact, were found in the tomb of Tutankhamun. Though their use has been documented throughout ancient history, they were not carefully studied until about forty years ago. Since this time, hundreds of studies have been conducted on these powerful seeds.

The research has uncovered some astounding findings: black cumin seeds are made of a very complex chemical structure containing over one hundred chemical constituents, including abundant sources of essential fatty acids. These chemicals are believed to be the reason black cumin has so many amazing health benefits.

Here are just 7 of those amazing health benefits:

And a third study published in a 2013 issue found black cumin has the potential to protect the heart muscles against myocardial incidents.

A study published in “PLoS One” found that thymoquinone had the ability to kill brain cancer cells while leaving the healthy brains cells untouched. Animal studies have shown thymoquinone is also able to fight breast cancer cell growth.

An animal study, from the October 2013 issue of “PLoS One,” found that thymoquinone is also able to fight breast cancer cell growth.

A 2013 study published in the “Journal of Ethnopharmacology” found black cumin may also be beneficial for our cognitive health. Daily dosing with the seeds or oil improves memory and helps a person to focus. An animal study published in the June 2013 issue of “Pathologie-Biologie” found that black cumin also assist nerve healing after an injury, leading to less nerve cell death. Although more research is needed, early studies indicate black cumin might play a role in nerve regeneration.

An animal study published in the “European Review for Medical and Pharmacological Sciences,” suggests that black cumin seed oil also has the ability to prevent liver and kidney damage caused by bybromobenzene, a contaminant sometimes found in food. You may be wondering if there is a natural alternative therapy for those who suffer from more extreme cases of high blood pressure. We are happy to report that there is, and it only takes 10 – 15 minutes a day to achieve permanent results. Find out how Sonic Wave can lower your blood pressure, no matter your age or history, permanently.

Research has shown that black cumin seeds are highly effective at relieving sore throats due to inflammation from acute tonsillopharyngitis.

5 Ways to Introduce Black Cumin into Your Diet

Now that you’ve heard about some of the amazing health benefits of black cumin, you’re going to want to incorporate them into your daily diet. Before I share with you 5 easy ways to do this, let’s talk briefly about the difference between black cumin seeds and black cumin oil.

Many people prefer to buy the seeds and process them themselves so they know they are getting a pure and potent source of black cumin. To do this, the seeds simply need to be heated slowly in a pan on the stove (stir often) until the taste goes from bitter to bland. Allow the seeds to cool and then put them in a coffee grinder or blender and grind into a powder.

This powder can be put into capsules or used in cooking recipes.

Some people prefer using the oil and if you’d like to go this route there are a few things to keep in mind. As with any vegetable or seed oil, black cumin oil can go rancid if not extracted, processed or packaged correctly. It’s also important that the oil be stored in a dark, glass bottle.

To make sure the quality of the oil is pure and potent, purchase organic oil that has been pure pressed without chemical extraction and that contains no additives or diluting oils.

This is an ancient recipe and remedy for just about everything. Simply mix equal parts roasted black cumin seeds with equal parts raw honey. So, a cup of seeds with a cup of raw organic honey. You can take a spoonful before bed and a spoonful upon rising. A truly delicious and healthy way to start and end your days.

Make a tea by simply pouring boiling water over a pinch of roasted seeds (or a few drops of the oil). Let it steep for 5-10 minutes and enjoy. You can also add a few drops or seeds to your favorite hot coffee or tea beverage.

The seeds can easily be added to breads and pastries, cakes and pies. Use your imagination!

Why not make your salad even healthier by adding some seeds to your favorite dressing? A particularly delicious dressing is made with lemon, cilantro, garlic, tahini, and black cumin seeds. Enjoy!

Of course you can take an ol’ fashioned approach and fill some capsules with your ground seeds and take with water.

Please tell us of the benefits you experience after taking black cumin. If you’ve experienced benefits in the past, please share with us below.