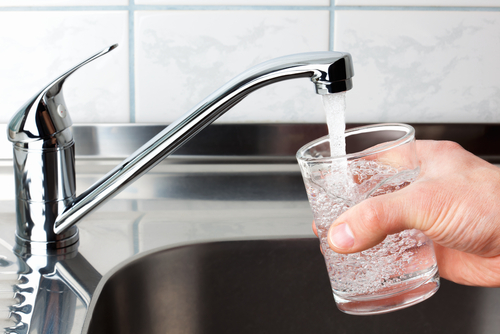 7 Ways Your Tap Water is Making You Sick

We’ve all heard it for many years now, the importance of making sure we drink enough water to keep our bodies healthy. After all, the human body is composed of mostly water, with adults averaging 55% – 60% water and babies averaging closer to 75%. The human brain is actually made up of close to 70% water (why you feel foggy headed when you are dehydrated), and the lungs are closer to being 90% water.

Beyond ensuring you drink plenty of water, it’s equally important, if not more so, to ensure you are drinking quality water. Sadly, high quality drinking water is hard to come by these days, even in the US. While we’re lucky and privileged to have access to water that is largely free of disease-causing microorganisms, drinking unfiltered tap water is not optimal for our health.

The Deal with Tap Water

So, why is tap water so bad for us? Recent analysis of municipal drinking water have shown that, despite government regulations, there are still plenty of contaminants that pose a danger to our water and our health. Even after the water has gone through municipal water treatment facilities, it comes out as something quite toxic.

The truly troubling reality is, because the regulations and methods used in the US are outdated, these treatment facilities often contribute to the problem by adding dangerous chemicals like chlorine and fluoride to the water as part of the “treatment” process.

The Safe Drinking Water Act, though making some progress, only regulates 91 potential water contaminants. Yet there are more than 60,000 known chemicals used within the U.S., many of which have been identified as probable carcinogens. Estimates put more than 2,100 known chemical toxins in U.S. tap water.

But it gets worse. Many municipalities transport their water in antiquated, corroded pipes, which have the potential to leach heavy metals into the water AFTER it has been treated.

Here are 7 dangerous chemicals that are typically found in tap water, and why you should avoid them.

Over 50 years ago, the U.S. government believed fluoride was necessary in preventing dental problems, and they mandated it be added to the water supplies. But current research has shown that fluoride does more harm than good.

Some of the harm this chemical can cause is damaging tooth enamel, suppressing immune and thyroid function, increasing cancer risk and disrupting the brain’s pineal gland. This is why many European nations have banned the use of fluoride. But why not here in the US? There is a big activist movement of people trying to get fluoride banned, and you can visit FluorideAlert.org to learn more.

Chlorine is typically used in these treatment facilities as a disinfectant, as it does effectively kill harmful microorganisms. Unfortunately, it also has toxic effects on the human body. In fact, chlorine has been identified as a leading cause of bladder cancer, and is associated with rectal and breast cancers, asthma, birth defects and premature aging of skin. Humans shouldn’t be swimming in it, and we certainly shouldn’t be drinking it.

In recent years, an alarming number of pharmaceutical drugs have been finding their way into our drinking water. Drugs ranging from painkillers, to birth control pills, antibiotics and antidepressants are now turning up in most municipal water supplies.

Heavy metals like lead and aluminum make their way into America’s tap water through corroded pipes in the plumbing system. Lead has been linked to learning disorders and developmental problems in children. Aluminum and other heavy metals have also been linked to brain, nerve and kidney damage. The startling reality is that some municipalities still transport water in lead pipes.

Radioactive fallout from Japan has been detected in some drinking water supplies throughout the US. Radioactive iodine-131 has so far been detected in 13 US cities and radioactive cesium and tellurium isotopes have also shown up in some cities. While the health implications of this aren’t completely understood, I think we can all imagine they’ aren’t good.

If you saw the movie “Erin Brockovitch,” you may recall that the chemical that was contaminating the water and poisoning thousands of people was called Hexavalent Chromium. Well, earlier this year the chemical, identified as a probable carcinogen by the EPA, was found in high concentrations in 31 US cities. Despite the fact this chemical is known to be toxic, there are no government regulations for the chemical being in our drinking water.

You read that right, arsenic, the poison known to be deadly, is found in many municipal water sources. In fact, the Natural Resources Defense Council estimates that as many as 56 million Americans may be currently exposed to unsafe levels of arsenic via their drinking water.

What Can You Do?

Though bottled water (in plastic) is not ideal, some services will deliver spring water that is housed in glass bottles. Look in your area to compare prices as this may be a good option for some households.

While we should be grateful we have access to “clean” drinking water in this country, we must be aware that it isn’t as clean as we think. It’s up to all of us to protect our health by ensuring our water is healthy.

But since we know that toxins lurk everywhere, not just in our drinking water, what else can we do to ensure our health and the health of our loved ones? The answer is to support the immune system so it can do the job it was intended to do. This means eating right, exercising, getting plenty of rest, drinking plenty of CLEAN water, taking a multi-vitamin and also taking a pure and potent omega-3 supplement.

The essential omega-3 fatty acids found in fish not only help your body fight inflammation, which is the root cause of ALL disease, they also boost your immune system so it can keep you healthy.

Find out how our DuOmega 3&7 can help you and your family stay healthy.