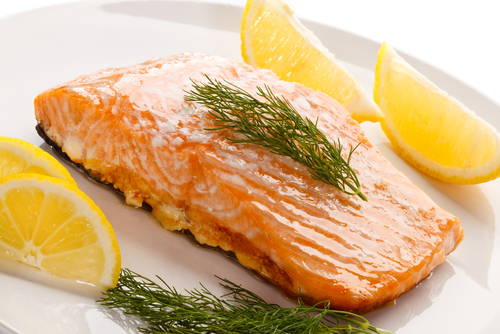 9 Reasons You Should be Eating More Fish

The old saying goes, “There’s plenty of fish in the sea,” so why aren’t we all eating more of them? For decades fish have been considered a healthy source of high quality, low calorie protein. Not only that, but studies have shown them to be an important “brain food” thanks to the high levels of omega-3s, which are incredibly important for optimum health. New studies are discovering just how beneficial omega-3s found in certain fish are to our overall health.

With this in mind, here are 9 reasons you should be eating more fish:

It turns out omega-3s are incredibly important to heart health. A Danish study published in Hypertension: Journal of the American Heart Association found that, of the 49,000 female participants, those who ate little to no fish had 50% more heart problems than those who ate fish at least once per week.

Other research has suggested that eating fish high in Omega-3s can also significantly decrease blood fat levels, which can contribute to a lower heart-disease risk as well.

According to a study from the Radiological Society of North America, eating fish high in Omega-3s can help preserve gray-matter neurons. This is the part of the brain in charge of memory and cognition. The researchers found that people who ate fish (baked or broiled – not fried) had larger brains in general and larger cells in those areas responsible for memory and learning.

Once we hit a certain age our hair and skin seem to become dry and brittle or flaky overnight, and eating a low-fat diet doesn’t help matters. These diets, though touted to be healthy, only deprive our skin and hair of the healthy fats they need.

The omega-3s found in fish are the exact type of healthy fat that will keep our skin and hair looking beautifully nourished at any age. There have also been studies that have shown omega-3 consumption is good for certain skin conditions such as eczema and psoriasis.

Several studies have found that consuming omega-3s can help ease the symptoms of depression. The studies found taking omega-3s along with an prescribed antidepressant was more effective than taking the antidepressant alone. One particular study, which looked at 52 pregnant women, found that taking a 300 mg capsule of omega-3s during their pregnancy significantly reduced their risk of developing postpartum depression.

The omega-3s found in salmon and other cold water fatty fish are essential to proper brain development in children. Certain studies have found that omega-3 consumption can also help soothe symptoms of ADHD.

Saltwater fish happen to be an excellent source of vitamin D, which studies have shown can help ward off disease and promote bone health. Plus, when combined with the omega-3s in fish, the risk of cognitive degeneration is greatly reduced.

There seems to be an interesting correlation between eating things that swim and having strong sperm swimmers. A study of 188 men found that those who ate fish had stronger, healthier sperm than men that didn’t eat fish.

The omega-3s found in fish have also been linked to better eyesight. If your mother ate a lot of fish when breastfeeding you, there is a very good chance you aren’t wearing glasses to read this post. Omega-3 fatty acids protect and enhance the retina, which is the tissue on the inner surface of the eye.

A study published in the Annals of Rheumatic Diseases found that women who regularly ate fish had a relatively lower risk of developing rheumatoid arthritis than those who didn’t. Swedish researchers followed 32,000 women for nearly eight years and discovered that those who ate fatty fish, such as salmon and mackerel, were 29% less likely to develop the disease. Omega-3s are key in fighting inflammation throughout the body, particularly inflammation of the joints.

Like vitamin C, omega-3s are a required nutrient but the body cannot make its own. This is why we must eat foods rich in omega-3s, like fish. Fish that have the highest amounts of omega-3s are cold water fatty fish such as salmon, tuna, mackerel, herring, sardine and halibut.

At this point you may be thinking, “What do I do if I really don’t like eating fish but I still want these health benefits?” If you’re one of those people that just doesn’t like the taste or texture of fish, and there are plenty of people out there who don’t, you would instead want to take an omega-3 supplement every day.