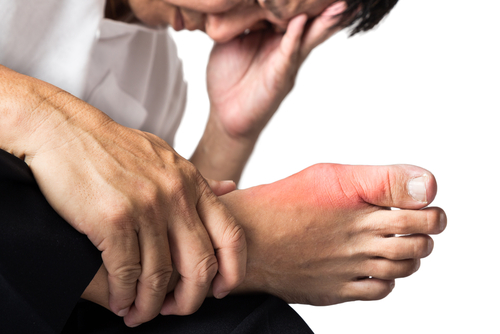 How to Naturally Relieve Gout Pain

Gout was historically called the ‘disease of kings’ or the ‘rich man’s disease’ because these were the only people who could afford to feast on rich foods and wine. Today, however, the incidences of gout are on the rise in developed countries. In the United States, it is estimated that between two and five million people are afflicted with gout, 90% being men in their 40s or older.

There is nothing funny about this condition, nor should it be taken lightly.

What Is Gout Exactly?

Gout is a type of arthritis that is accompanied by intense pain. Those who suffer from the disease often compare the pain of gout to being stabbed repeatedly by a hot poker. Along with the pain comes stiffness and inflammation of the joints.

Caused by excessive uric acid that crystalizes in the joints, gout is a result of a breakdown in the metabolic process that controls the amount of uric acid in the blood. While more prevalent among men, gout can also affect women, usually after menopause. Once a woman reaches menopause her body significantly cuts its production of estrogen, a hormone which helps the kidneys excrete uric acid. When estrogen dips, uric acid levels in the blood start to rise. By age 60, the cases of gout are nearly equal in both genders.

There are certain factors that can lead to gout such as underlying medical conditions, genetics and lifestyle habits. The biggest contributor, and one every individual has an ability to control, is eating large amounts of unhealthy foods that wreak havoc on uric acid levels.

Poor food choices lead to obesity, which leads to the development of many health problems, including gout.

Like other forms of arthritis, gout is an inflammatory condition that is linked to metabolic syndrome, a condition characterized by obesity, hypertension, and poor glucose and insulin metabolism.

Not only can excess body weight lead to the development of gout, it can also exacerbate gout attacks. Nerve endings are already sensitive in people with this condition, but overweight patients tend to experience more painful and intense flare-ups because their bodies (nerve endings) have to support all of that extra weight.

The best thing you can do is to simply lose the weight and keep it off. A 2002 study published in the journal Circulation proves this: researchers studied obese women with metabolic syndrome and found that weight gain, especially around the abdomen, increased the levels of a protein called cytokines in their immune system. Certain cytokines cause an inflammatory response that can contribute to joint pain.

While conventional medicine often recommends drugs as the “best” option for treating gout, these pharmaceutical solutions only mask symptoms – never treat the underlying cause. Often the symptoms, as well as the underlying cause of gout, can be fully treated by losing weight and making better eating choices.

Foods to Avoid with Gout

We spoke about the fact that gout is characterized by increased uric acid levels in the blood, and that uric acid makes its way to the joints where it crystalizes and causes excruciating pain. But where does this uric acid come from exactly?

Uric acid is produced when the body breaks down a chemical called purine. While purine occurs naturally in the body, it is also found in certain foods. It stands to reason that individuals suffering from gout should stay away from foods high in purine such as the following:

Not only does beer increase your uric acid levels but it also makes it incredibly difficult for your body to remove uric acid from the blood – a bad double whammy. Wine is a healthier choice, but discretion should still be used, as heavy drinking is not good for any one. During a flare-up it is recommended that individuals abstain from alcohol altogether.

When it comes to purine content, all meat is not created equal and the biggest culprits may surprise you. While chicken is considered safer than red meat or pork, it is better to indulge in red meat and pork once in a while than lamb, which is high in purine.

Turkey is usually regarded as a rather benign meat, and in some minds the better choice over red meat. But when it comes to purines, turkey and goose have higher levels than any other food, so it’s best to avoid them altogether.

No one who is concerned with their health should consume beverages sweetened with fructose, especially people with gout. This includes sodas and fruit or sports drinks. Not only do sugary drinks help you pack on the pounds, the artificial sweeteners stimulate the body to produce more uric acid. A lose/lose situation.

Ordinarily eating more vegetables would be recommended for just about anyone, but if you suffer from gout, there are certain veggies high in purines you should avoid. Asparagus, spinach, cauliflower and mushrooms contain more purines than any other vegetables. If you really like these vegetables they could be an indulgence once in a while, but not eaten on a daily, or even weekly basis.

Intake of just about every other vegetable should be increased as veggie-rich diets help the body clear purines from the blood.

Foods That are Good for Gout

It’s important you get enough protein in your diet while avoiding certain high-purine, animal-based proteins that can exacerbate gout. Beans and lentils are a great source of protein. Quinoa is another safe form of protein, as is yogurt.

Whole grains like brown rice, oats, and barley are a nutritional source of many important nutrients yet won’t increase the amount of uric acid in the body. And of course, besides the vegetables we mentioned, all other fruits and vegetables should be safely consumed. Vitamin C rich foods and cherries have even been shown to potentially reduce gout attacks.

Other Lifestyle Changes to Help Gout

Gout can be cured, and one of the quickest ways of getting it out of your life is to combine a sensible diet with a regular exercise regimen that will help you shed any excess weight. To start, try gentle exercises like walking, yoga and swimming. As you get healthier and the pain subsides, consider biking, jogging and weightlifting to keep the weight off and build strength.

Gout negatively affects a person’s quality of life and makes enjoying simple (or big) pleasures difficult. If you suffer from gout, your best option is to turn to natural sources of relief from weight loss and making better food choices. You may also want to investigate supplementation that offers ingredients that get to the root causes of joint pain and inflammation.

Not all joint pain supplements are created equal, however, so look for one that:

Click Here to discover a joint pain supplement that ticks ALL of the boxes!