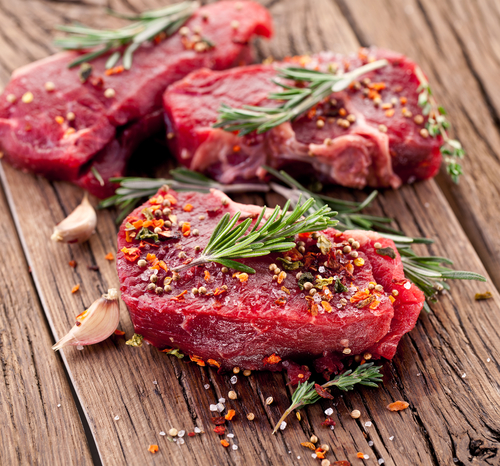 Meat: The Good, The Bad and The Ugly

For years we’ve been told that, when it comes to our health, we need to pay attention to the kinds of meat we’re eating. Red meat or white meat… which is better? There have been numerous studies that have linked red meat consumption to increased health risks including heart disease, stroke, diabetes, and certain cancers. While this information can help us make healthier choices, we still have to be able to identify red meat from white.

But it’s not that easy.

For instance, dietary resources will generally categorize “white meat” as fish and poultry and “red meat” as land animals like beef, pork and lamb. But in culinary circles, veal is typically considered white meat and duck or goose red.

How does science differentiate between the two? By pointing to concentrations of myoglobin, an iron- and oxygen-binding protein. Higher concentrations of this protein and slow-twitch muscle fibers point to red meat. However, the dark meat of chicken or turkey, typically considered white meats, have more myoglobin than veal or pork.

Is Red Meat Really the Enemy?

To date, scientific studies have merely been able to find correlations between red meat consumption but not specific causes. Data also cannot clearly point to the mechanism by which certain foods, including red meat, promote or undermine health, though we know increased inflammation is involved in the creation of all disease.

There are some theories as to why exactly red meat is considered “less healthy.”

Walter Willett, MD, DrPH, chair of the department of nutrition at the Harvard School of Public Health believes that high amounts of heme iron is most likely a contributing factor for type 2 diabetes, while cholesterol and fat may contribute to heart disease. Yet there are conflicting studies that show no correlation between saturated fats and heart disease and stroke.

What About the Cooking Method?

Of course we can’t talk about which meats are the healthier choice without discussing cooking methods. Animal proteins, no matter what color it is, can produce carcinogenic and atherogenic compounds (cancer-causing compounds) when cooked at high temperatures. So, whether you are char-broiling a juicy burger or slow-braising a pot roast, both methods could cause potential health risks.

As you can see, the meat debate is not clear cut, and each study adds to the confusion. If you and your family eat meat, what can you do to make the healthiest choices?

Here are some keep things to keep in mind:

When it comes to processed meats, it really doesn’t matter what color it is because it is ALL unhealthy. This is because the processing method requires the use of chemicals such as nitrate and nitrites that have been linked to cancer. And organizations such as the American Institute of Cancer Research has been unable to determine any safe exposure level to these chemicals. Your best bet, stay far away from cold cuts, hotdogs and bacon.

The old saying goes, “You are what you eat.” In reality, you are what the thing you’re eating ate. If you’re going to eat meat, it is always advisable to choose meats that have been raised in a healthy and sustainable way. This means paying a little more for free-range chicken and pork and grass-fed beef. Wouldn’t you rather your family eat animals that have eaten a nutrient-rich diet, and not one laden with grain, hormones and antibiotics? Remember, whatever they ate is going directly into your body and either promoting wellness or doing harm.

Since the complete and final verdict seems to be out on beef, it’s a good idea to limit your intake to once or twice a week. Don’t ignore other great protein choices like lean chicken and turkey and eggs. Beyond being potentially bad for your health, beef is bad for the environment as cattle production creates almost five times more greenhouse gases than hog farming.

Make Meat Your Side Dish

Many people have embraced a flexitarian diet, which treats meat more like a side dish and makes vegetables and fruits the main dish. Consider foregoing those large hunks of meat and cooking small amounts, making sure to eat plenty of vegetables, whole grains and legumes. This is not only healthier for your body but for your wallet as well. And when you’re spending less on food, you can afford to spend more on better cuts of meats.

Remember to Not Overcook Your Meat

While there’s no denying that charbroiled meat is delicious, remember that cooking meat at high temperatures leads to cancer-causing by-products to be released into the meat. It’s better to cook meat low and slow. Go for fall-off-the-bone instead of dark and crisp.

What’s the moral of this meat story? While you can consume meat and lead a healthy lifestyle, it’s important to take certain factors, which I’ve listed, in mind. And, to be extra healthy, try cutting down on your meat consumption and upping your intake of fresh fruits and vegetables, and take a quality omega-3 fish oil supplement, which will fight inflammation caused by red meat consumption.