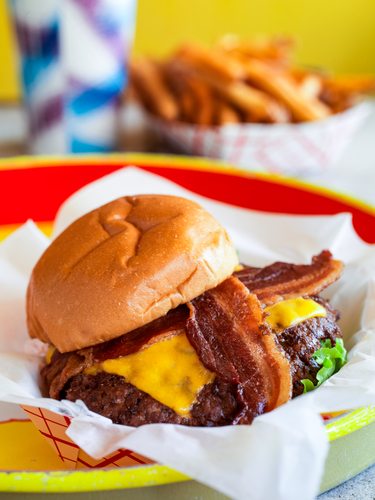 If you have high blood pressure and love eating out at restaurants, you might want to have a seat and grab a tissue because what you are about to read may make you weep.

Recent studies have found that eating meals in a restaurant – whether it is a fast food joint or proper sit-down venue – makes it incredibly easy for people to consume a higher amount of calories, saturated fat and salt –

…which is the main risk factor for cardiovascular disease –and death.

According to the Centers for Disease Control (CDC) nearly 70 million Americans have high blood pressure.

To put that into better perspective, that’s roughly 1 out of every 3 American adults with the disease.

And only half of these people have their disease under control, which explains why health care services covering blood pressure related incidences have climbed to $46 billion per year in this country.

If not treated, high blood pressure can lead to heart failure, kidney failure and stroke, and patients can even experience trouble with memory and understanding.

The University of Singapore’s Study

The University of Singapore recently conducted a study to determine if eating out at restaurants could be linked to hypertension. The study followed 501 young adults between the ages of 18 and 40 who attended the university and collected data on their blood pressure as well as body mass index (BMI), physical activity levels, lifestyle, and how often they ate out.

Overall the researchers found that the students that presented with pre-hypertension or hypertension were the ones who were far more likely to eat their meals out during the week, have a higher BMI, lower levels of physical activity, and were current smokers.

A significant finding of the study was that by eating just one extra meal out during the weak, there was a 6% increase in the risk for pre-hypertension.

This is really the first study of its kind that associates dining out and an increased risk for hypertension.

The author of the study, Professor Tazeen Jafar from the Health Services and Systems Program at Duke-NUS Graduate Medical School in Singapore has said, “While there have been studies conducted in the United States and Japan to find behaviors associated with hypertension, very few have surveyed a Southeast Asian population. Our research plugs that gap and highlights lifestyle factors associated with pre-hypertension and hypertension that are potentially modifiable, and would be applicable to young adults globally, especially those of Asian descent.”

Based on the findings, Tazeen recommends there be policy changes to regulate the amount of salt and fat served in restaurants.

He also advises clinicians to speak to young people, especially males, about their risk for pre-hypertension and to recommend they modify their eating behaviors.

Sorry guys, you may want to limit those pizza, wings and beer nights to just once a week.

It’s Not Just Where You Eat But how Porous Your Food Is as Well?

Many people prepare their food at home thinking it’s the healthier choice, but they are preparing processed foods which are loaded with sodium (not to mention laden with trans fats that can pack on the pounds).

Well, scientists from the University of Illinois have found that manipulating the porosity (how porous the food is) of food during manufacturing can decrease the amount of sodium needed in these common foods found on your local grocery store’s shelves.

Youngsoo Lee, the study’s author, knew 70% of most people’s salt intake comes from processed foods, so she and her colleagues wanted to study the microstructural properties of these foods to see exactly how salt gets released when the food is chewed.

It turns out the majority of the salt in these types of foods does not get released in the mouth, which means people are consuming far greater amounts of sodium than is necessary to make the food taste good.

So the researchers from Illinois set out to see if they could fiddle with the actual structure of the food and get more salt released while chewing.

The manufacturers then wouldn’t have to add as much and consumers wouldn’t notice the difference in taste.

Without getting too technical, the researchers increased the porosity by using a fat-protein emulsion. This caused foods to break apart more easily when chewed, exposing more surface area which naturally increased the saltiness.

“When foods crumble easily, we further reduce the amount of salt that is needed. Changing the number or size of pores in the food’s surface can help us to accomplish this,” Lee explained.

While all of these studies ultimately aim to decrease the incidences of hypertension in this country and abroad, they specifically deal with sodium intake, which has been demonized by the medical community.

But what if salt really had nothing to do with high blood pressure?

The REAL Root Cause of High Blood Pressure

Forget all of this obsessing with salt intake, wouldn’t it be better to get to the root cause of your high blood pressure instead of constantly having to eliminate your favorite foods just to live with it?

Wouldn’t it be great if you could lower your blood pressure using a simple and all-natural method and get your health and energy back?

You’ll learn how he’s worked with patients all around the world to identify the REAL reasons they struggle with high blood pressure.

…and helped thousands finally get their issues under control naturally with a simple evaluation you can do right in the comfort of your own home.

Watch the video on the next page to hear the remarkable story.