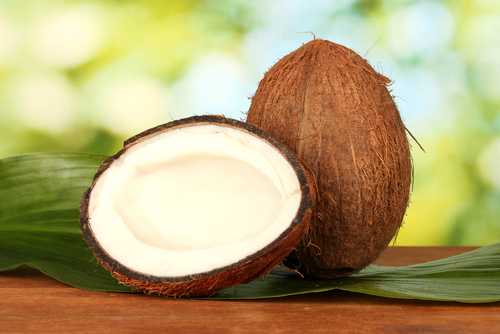 The health benefits of coconut oil have been known by many cultures for millennia. Not only does it have the ability to destroy harmful microbes like viruses and protozoa, it also provides our body high-quality fat that is essential for optimal health.

A Great Source of Lauric Acid

About half of the fat found in coconut oil is lauric acid. In fact, coconut oil contains the highest amounts of lauric acid of any substance on Earth! Our bodies actually convert this acid into monolaurin, which is a monoglyceride that has the ability to destroy lipid-coated viruses such as HIV and herpes, measles, influenza, gram-negative bacteria, and protozoa such as giardia lamblia.

Coconut oil is comprised of medium chain fatty acids (MCFAs) that are easily digested and absorbed across cell membranes. MCFAs are immediately converted by the liver into energy rather than being stored as fat. This is why coconut oil is so amazing when you’re in need of a quick energy boost. Plus, it doesn’t produce an insulin spike like many carbohydrates.

But What about the Saturated Fat?

We have been told for decades that saturated fat is bad for us; that it will raise our cholesterol and make us all have heart attacks. But what science is now showing us is that not all saturated fats behave the same in our bodies. Coconut oil, being high in lauric acid, is actually incredibly beneficial to our health.

It’s also worth noting that countries like Thailand, which eat very high amounts of saturated fats like coconut oil, have very low instances of disease on average. Individuals consuming a traditional Thai diet have less instances of heart disease and the lowest rates of cancer for all 50 countries studied by the World Health Organization (WHO).

Other countries known to consume high amounts of saturated fat, including some in the Mediterranean, show similar trends.

There is No Proof Saturated Fat Causes Heart Disease

Just the term “saturated fat” is enough to give us all the willies because it has been vilified for decades in this country. But there is no real evidence to back up the long-held belief that saturated fat raises cholesterol and increases our chance of developing heart disease. In fact, the lipid hypothesis has, by now, been largely discredited.

You need only look at the “oil timeline” in this country to get a clearer picture of the health benefits of good fats and the risks of “healthy” oils.

The truth is, saturated fats are completely necessary for cell function and growth and the star in the world of saturated fats has to be coconut oil.

Here are some of the amazing benefits coconut oil offers your health:

As we mentioned previously, coconut oil contains lauric acid which has been shown to increase HDL, or the good cholesterol in the body, and helps improve cholesterol ratios overall.

Coconut oil can lower the bad cholesterol by converting it into pregnenolone, which is a molecule that is a precursor to many of the hormones made in our bodies. On top of this, coconut oil can help restores healthy thyroid function which in turn balances our cholesterol levels.

Remember those medium chain fatty acids we spoke of earlier? Well, when the liver breaks these down it leads to efficient burning of energy. In fact, one study found that women who ate two tablespoons of coconut oil every day for 12 weeks not only didn’t gain any weight, they lost abdominal fat. That fat is particularly hard to lose and contributes to heart disease.

Nothing fights the effects of aging in the body like antioxidants. Coconut oil is loaded with antioxidants so consuming it can help protect our bodies’ cells from free radical damage. Oxidation is also the major cause of skin aging, so adding coconut oil to your diet can help you retain a youthful appearance.

Studies have found that the MCTs found in coconut oil may help improve the brain function in patients with milder forms of Alzheimer’s. The improvements were caused by higher ketone values (derivatives from fat that, besides glucose, are the only other fuel source the brain can function on). Coconut oil MCTs hold the key to improved memory and overall cognitive ability.

As we mentioned up top, almost 50% of the fatty acid in coconut oil is lauric acid. This fatty acid has the ability to kill harmful pathogens like viruses, bacteria and fungi. For instance, lauric acid has been shown to kill the bacteria Staphylococcus Aureus, which is very dangerous, as well as the yeast Candida Albicans.

Coconut Oil is Great for Skin and Hair

Coconut oil is absolutely one of the best moisturizers for hair and skin on the planet. It can be used as a pre-shampoo treatment on the scalp for those who suffer from dandruff, and it can even be used as a natural sunscreen. Coconut oil is all natural and is safe to use as an after-bath lotion for infants.

These are just some of the many wonderful benefits of coconut oil. When you consider the fact that over one-third of the world’s population consumes coconut oil, and with amazing results, you have to wonder what has taken the United States so long to catch on to this incredible source of nutrition.

What about you? What do you love about Coconut Oil? Share your stories in the comments below!