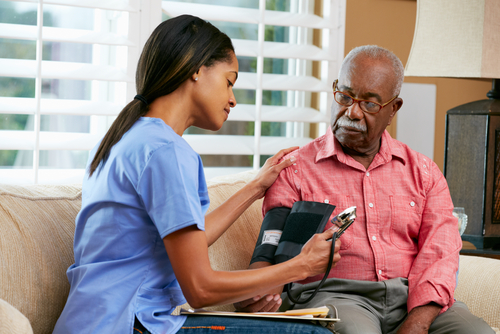 If I were to ask you what causes high blood pressure, what would you say?

Eating too much salt, right?

While consuming large amounts of sodium has been linked to hypertension, salt is far from being the only culprit.

You may have also heard that consuming too much alcohol and high levels of stress can raise your BP numbers as well.

But there are some not-so-obvious causes of hypertension that you may not be aware of.

By eliminating these factors from your life, you’ll stand a much better chance of aging without having to worry about the risks and complications of living with high blood pressure.

The Not-so-Sweet Side of Sugar

Salt gets all the bad press, but sugar, its evil and just-as-white cousin, has as much -if not MORE- potential to cause hypertension.

Not only can sugar wreak havoc on your waistline, it can actually cause more health and cardiovascular problems than salt.

Fructose, you know, that deliciously dangerous sweetener added to numerous processed foods and sodas, is a main culprit in the development of hypertension.

An easy way to do this is to cut out processed foods and soft drinks.

Did you know that just one 16-ounce can of soda (non-diet) contains more than nine teaspoons of sugar?

Is Your RX a Prescription for Disaster?

Over-the-counter medications and prescriptions are created to make us well.

But certain drugs have the ability to raise blood pressure.

For instance, according to the Mayo Clinic, people who take acetaminophen (Tylenol) on a daily basis are more likely to develop hypertension than people who don’t.

Other pain and anti-inflammatory drugs like ibuprofen (Advil) and naproxen sodium (Aleve) can raise your blood pressure as well if taken regularly.

Some antidepressants currently on the market like Effexor, Wellbutrin and Norpramin have been linked to increased blood pressure, as have some decongestants and inhalers.

When in doubt, speak to your doctor or local pharmacist to see if your medications may cause hypertension.

The Danger of Those Restless Nights

Sleep apnea is a fairly common disorder and for many people it goes undiagnosed.

But snoring and interrupted breathing can be very dangerous, and as the National Sleep Foundation warns, when breathing is interrupted your oxygen levels fall and the brain sends an urgent warning throughout your entire nervous system to increase the flow of oxygen to the heart and brain, and this process constricts your blood vessels, and it does so night after night after night.

This, along with the stress hormones that are released from lack of quality sleep, can put you at risk for high blood pressure.

If you suspect you may have sleep apnea, see a specialist and consider losing weight and making other necessary lifestyle changes.

Are You Ingesting BPAs?

A study published in the journal Hypertension found that the chemical BPA, which is found in the lining of cans and plastic bottles, has the potential to seep into our food and beverages and, when ingested, raise blood pressure.

Though more studies need to be done, health experts recommend reducing your risk of BPA exposure by eating less canned food and not drinking or serving hot foods in plastic containers but opting for stainless steel or glass.

We’ve been told for a while now that having close personal relationships is good for our overall health and well-being.

But a new study at the University of Chicago has found that feelings of loneliness and isolation in people 50 years of age and older directly correlate to high blood pressure.

The study points out that spending time with close friends and family that offer social and emotional support is relaxing, and this feeling of being relaxed helps to keep our BP levels down.

So, if you’re 50 or over and feeling a bit lonely these days, get out there and cultivate some new friendships and rekindle some old ones.

No one can deny that slipping into a hot tub or sauna can feel incredibly great on your tired aching muscles and joints, but, if you already have high blood pressure and your doctor has told you to avoid moderate exercise, you should avoid those hot tubs and saunas as well, as hard as that may be.

This is because the heat from hot tubs and saunas opens the blood vessels, just as they are opened during exercise.

Saunas, in particular, can be dangerous because their temperature is difficult to control – so – always be cautious and avoid if you can.

As you can see, there seem to be things everywhere that can either lead to hypertension or at the very least, exacerbate it.

Wouldn’t it be great if you could get rid of your high blood pressure once and for all and never have to take another medication that caused nasty side effects, like headaches, weird rashes and insomnia?

Would you like to get to the root cause of your high blood pressure instead of just constantly masking the symptoms?

Wouldn’t it be great if you had a simple, personalized, and all-natural plan to lower your blood pressure and finally get your health and energy back?

You’ll learn how he’s helped thousands around the globe with a personalized plan based on their own unique health challenges at a cellular level!

And he can show you how to do it, too.

Watch the video on the next page to hear this doctor’s remarkable story.