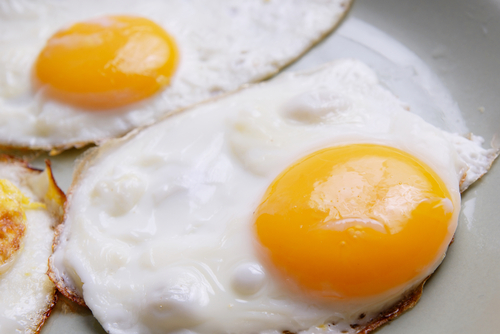 Prepare to be eggcited at the latest findings by scientists which were published in American Journal of Clinical Nutrition – eating eggs may reduce the risk of type-2 diabetes. Past studies have concluded what has been suspected for decades, that exercise and nutrition play a critical role in the development of the disease. But research is now suggesting that the consumption of eggs has led to improvements of glucose balance, among other health indicators.

The University of Eastern Finland assessed the dietary habits of a group of 2,332 men between 42 and 60 years of age. This was to gauge a baseline of the Kuopio Ischaemic Heart Disease Risk Factor Study. During a follow-up of 19.3 years, 432 men were diagnosed with type 2 diabetes.

This link was strong even after other factors like physical activity, smoking, body mass index and diet were taken into consideration. Oddly, consuming more than four eggs per week did not bring any significant additional benefits, so four seems to be the magic number.

Unlike some populations, such as ours here in the states, Finland does not consider the consumption of eggs to be unhealthy. No doubt they recognized decades ago that eggs really are the perfect food and contain beneficial nutrients that can have a beneficial effect on glucose metabolism and low-grade inflammation.

Why Have Eggs Gotten Such a Bad Wrap in America?

Looks like some American policy makers have egg on their faces. For multiple generations we have been told in this country that eating fewer eggs was a good idea, because eggs, after all, contain cholesterol, and everyone knows cholesterol (the bad kind anyway) is bad for our health. But now this thinking has recently been debunked. It seems that when the committee responsible for developing our nation’s dietary guidelines decided to finally ditch the low-fat diet, along with it went the caps on dietary cholesterol. This boils down to many of us staying away from delicious egg yolks and shellfish for absolutely no reason, because it now seems there is no relationship between the cholesterol we eat and the cholesterol found in our blood.

Why were we told something so wrong for so many years about eggs and cholesterol? Because nutritional policy has never really relied on hard science but what is instead called epidemiological or observations studies, in which groups of people are followed over the course of a number of years. But even the most rigorous of these studies has limits.

But the cat has been let out of the bag and policy makers are now catching on to the fact that nutritional guidelines should not be set based on anything other than hard science. As a result of decades of misguided information, Americans have cut fat and cholesterol out of our diets and turned to grains and pasta instead. We have essentially cut fat intake by 25% and increased our carb intake by 30%, which has led to higher incidences of obesity, diabetes and heart disease.

Since the first nutritional guidelines to restrict eggs and other foods that contain saturated fat and cholesterol were released by the American Heart Association in 1961, the citizens of this country have been the subjects of diet experiments. Moving forward, policy makers in this country should rethink how they go about developing their guidelines and what they are basing them on. In the meantime, we would all do well to think for ourselves and eat how our ancestors ate – stay away from the refined, processed garbage and eat eggs and full-fat dairy.

If you love the idea of eating more eggs to regulate your diabetes, then you’re going to love this 100% natural protocol that could completely reverse the root cause of your blood sugar imbalance.

In the free video on the very next page, one medical expert shares the simple yet shocking details of this diabetes-reversing method and how you can learn a few simple tweaks to what you eat and how you move that can engineer a metabolic reboot so you can maintain healthy blood sugar levels for the rest of your life.

She even shares one specific step you can try immediately to help you get control of your diabetes today.

If you’d like to learn this simple strategy and the tools to fix your blood sugar system without relying on drugs, watch the video now.